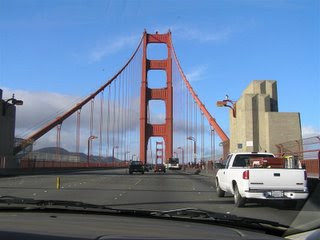 Posted by Blogeline at 9:56 AM No comments:

Is it that time of the year already? Since I don’t usually dress up..well, never actually have, I will help out in a not-so-scary way tonight at an Elementary School. I’ll help the little kiddos that are too scared get out of the haunted house so they don’t have nightmares. Compared to my hubby who will try and scare the shit out of them.
Posted by Blogeline at 3:04 PM No comments:

Maybe now, I won’t have all that comment spam anymore. Let’s see if it helps.
Posted by Blogeline at 2:28 PM No comments:

It’s almost here. Just a little bit longer and the waiting is over.
What am I talking about?

(OK, now I wish I could hide the rest or else this wouldn’t make sense. Anybody know how?)

BTW. I was talking about the weekend…..
Posted by Blogeline at 2:26 PM No comments:

Back from the dead

Well, I finally made it back home yesterday and after a well-deserved goodnight sleep, I am back in the office.
I am so glad it’s Friday!
So, did I miss anything?
Posted by Blogeline at 8:28 AM No comments:

Due to a severe case of an empty brain I have not been able to post anything at all today. My apologies to all who were expecting something.

I'll be GONE for a few days (back on Friday) for a very important business trip. Maybe I get bored over on the West Coast and actually post something interesting.

Later.
Posted by Blogeline at 4:16 PM No comments:

Well, I was going to do some “research” for that project tonight, but it all didn’t work out, but hopefully I get to go in the near future.
Instead I will be spending my evening at or in a friend’s hot tub….can’t wait!

If anyone is interested in sponsoring my research though; donations are welcome, preferably in one-dollar bills.

Thanks.
Posted by Blogeline at 8:41 AM No comments:

I want to live there!

Just read that in a local (Florida) newspaper.

WE HAVE 2 OR 3 bedroom MH, clean, close to prison.

Sounds good, huh?
Posted by Blogeline at 2:50 PM No comments:

Hmm. They must’ve been delayed this morning

I know VRE sucks. That’s why I stopped riding it. Metro costs as much with parking and they run every 5-6 minutes and I am on time once again. Lucky me, I live close to the VRE and metro stops.
Now, I get to complain about idiots riding the metro again, but so far all the idiots were fat and that’s boring.
Posted by Blogeline at 10:24 AM No comments:

Someone in Oregon won the jackpot…idiot.
But that’s OK. The starting jackpot is still $15 Million.
Posted by Blogeline at 8:15 AM No comments:

Where are you?
Posted by Blogeline at 3:28 PM No comments:

So, you think prices for chicken will go down? If so, that’s what I’m going to be eating. Just when the whole mad cow disease thing started in Europe and all in Germany. Beef was so cheap over there; we had steaks almost every other day. We’re all going to die anyway.
Plus with all the high gas prices you need to find cheap food.
Posted by Blogeline at 3:32 PM No comments:

When I’m hungry, I need to eat right then and there. No waiting at the microwave for me baby.
Posted by Blogeline at 12:53 PM No comments:

OK, I finally have my own now. Well, I’m sure others have said this before but this is all MINE.
His is how it all began.

I did have funny thought though this morning while I was riding the metro. When I went to college (George Mason University) and I took English 101 (that’s right, I took the class for native English speakers and not the foreigners’ class), our professor was really into writing articles and such. So he encouraged us to write about certain issues and submit them to the student newspaper, the Broadside. Well, I wrote a couple of those about topics that interested me and that I felt passionate about but I never got published. OK, there are many students that don’t get to have their stuff published, I thought, but today I was thinking that it might have had something to do with the content of the things I wrote about.

That could be. But that's just me.

Oh and BTW, I am currently reading How to Talk to a Liberal (If You Must) : The World According to Ann Coulter by Ann Coulter, after just finishing The Official Handbook of the Vast Right Wing Conspiracy by Mark W. Smith. Before that I read Let Freedom Ring : Winning the War of Liberty over Liberalism by Sean Hannity and before that I read Slander: Liberal Lies About the American Right by Ann Coulter.
Who would've thought?
Posted by Blogeline at 2:25 PM No comments:

I hope you found what you were looking for.
Or should I say:
Ich hoffe, Du hast gefunden, was Du gesucht hast.

(My German is getting a little rusty)
Posted by Blogeline at 1:58 PM No comments:

Did anybody see him? 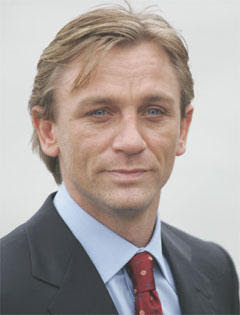 Who’s that supposed to be? That is not how James Bond looks like. Look at his ears! I want my Brosnan back.

PLEASE!
Posted by Blogeline at 1:07 PM No comments:

My chances just went up

I know, it’s getting kind of lame with me and the whole Powerball stuff, but I have nothing else to write about now, so just shut up and read!
This Saturday’s jackpot is $290 Million. And I have 100 tickets. Now, I didn’t turn all stupid and spend $100 on Powerball tickets. I only got 5, but my office decided it was time for a career changes and got 95 tickets as well. So, of course that won’t give me as much but still a pretty good amount to quit.

So, if you don’t hear from me after tomorrow, I might be a Millionaire (or I just don’t have anything to write about).
Posted by Blogeline at 1:02 PM No comments:

About time, if you ask me, but nobody every does.

I thought, I really need to write some profound, but as hard as I try, nothing comes to mind.
Well, maybe I have more later.
Posted by Blogeline at 9:53 AM No comments:

WASHINGTON -- The Washington Monument has been evacuated after a bomb threat was reported.

The threat was made by phone to D.C. Police.

Park Police are evacuating the grounds around the monument, but traffic routes in the area are open.

Security officers will search the grassy areas around the structure for anything suspicious.

The Washington Monument was evacuated Friday after a bomb threat. Nothing suspicious was found.

UPDATE: False Alarm...well, they didn't find anything. Who would've thougt?
Posted by Blogeline at 2:52 PM No comments:

Now, I didn’t get any spam about this.
Posted by Blogeline at 2:05 PM No comments:

OK, all you idiots out there.
I don’t need payday loans because I can (pretty much) manage my money. But if you have to plant some comment spam, don’t double post. IDIOT.
Posted by Blogeline at 8:32 AM 2 comments:

This whole lottery thing isn’t really working out.
Got to get more Powerball tickets.
Posted by Blogeline at 7:56 AM No comments:

Posted by Blogeline at 10:31 AM No comments:

People spend way too much time online sometimes.
Posted by Blogeline at 7:50 AM No comments:

I really do want to read, but there is this huge stack of things that I need to file and the checkbook needs to be balanced and….
So, what am I doing instead? Spending hours on the computer doing really nothing.
Is it time for a drink yet?
Posted by Blogeline at 2:59 PM No comments:

OK, after not winning the jackpot last night I am now trying for the $205 Million jackpot. I was close to buying scratchers, but I didn’t want to waste my money.

Ok, this is getting really funny.
First the penis enlargement (no thank you, mine is long enough), then something about sex toys (no thanks again, I got enough), and now a “work from home” offer? Geesh people, can’t you do any better?
Posted by Blogeline at 8:39 AM No comments:

It seems a lot of people are a little offended by a window display at the new part of Tyson’s Corner shopping mall.
The local TV station has a report (with pictures) and the WaPo has an article on it as well.

"Well," said Steina Rubin of Bethesda, "I find it just totally disgusting." And, no, she would not be shopping there. "I'm not entering a whorehouse," she said. "I come to the mall with my daughter. It's disgusting. And I'm from Europe !"

Personally I don’t see the problem, but I guess it’s because I grew up in a city that has a red light district and I knew what a prostitute was before I really understood what kind of services she is really offering. So, in my opinion, Victoria’s Secret sells not cotton panties but real nice lingerie and unless you have no windows people are going to see mannequins wear them. They’re not even real people. So, relax everybody, ok?

Oh and just in case you people want to complain about something else. Target will be selling vibrators soon.
Posted by Blogeline at 9:21 AM 1 comment:

That’s right because I have the winning ticket for the Powerball drawing tonight.
$180 Million, baby.

I know what's good for you

See, we always eat (at least) dinner together at home. And that is at the dinner table! I'm so proud of myself.
That reminds me...I'm getting hungry.
Posted by Blogeline at 10:38 AM 2 comments:

OK, I don’t know why somebody would ask Jeeves if their body cramps up often, but I sincerely hope you are doing better now.
Posted by Blogeline at 10:20 AM No comments: 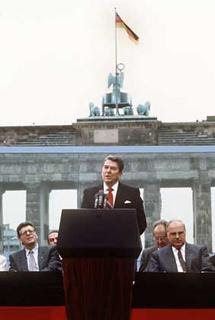 Today is Unification Day in Germany.

My dad pointed me to this Radio Station that plays songs by German artists only all day. And they do have a live stream.
Posted by Blogeline at 12:54 PM No comments:

Right now I only need one more visitor to reach the magic 5000 mark. I hope the lucky one will at least get here because of recent postings and not because of OLD pictures.
Posted by Blogeline at 12:45 PM 1 comment:

The weekend is over and I am still doing OK.
Besides going to the Oktoberfest, which was OK, this weekend was very special, because Saturday was the very first day my husband officially retired from the United States Navy!!!
He celebrated by going fishing and getting a real nice sunburn. His brother called from Kuwait (he is in the California National Guard), and wanted to tease him about being old and retired. But I reminded my brother in law that he is actually the older of the two.
Anyway, so now that we’re not active duty anymore things are going to change a little bit. Well, they have been different every since his last day in mid July.
One very important fact is a “civilian” job, which he has yet to find. But we’re still OK. I keep telling my parents that we are not YET having to move to Florida, because surely the money we’ll be making by selling our house here will buy us a nice little home down there (at least a double wide!!). Just kidding.
So, that was my weekend. Oh, and I had steak too!!!!
Posted by Blogeline at 9:28 AM 2 comments: